Preserving the Woodlands with it’s myriad of wildflowers would have been much more difficult if it had not been for one particular flower — the Gentner’s Fritillaria.

The Fritillaria gentneri, one of the rarest native plants in the world, is found only in isolated populations in Southern Oregon. The largest concentration of this rare and showy red bell is found in the woodlands immediately surrounding Historic Jacksonville, Oregon.

Growing mostly in dry, open fir and oak woodlands, the FG grows to a height of 20 to 50 inches with two to 13 large dark red (maroon) bells that are mottled with pale yellow. The sturdy stems range from glaucous green to purple.

In 1944, Dr. Louis Gentner, an entomologist and assistant superintendent of the Southern Oregon Branch Experiment Station in Medford, reported what appeared to him an undescribed species of Fritillaria. 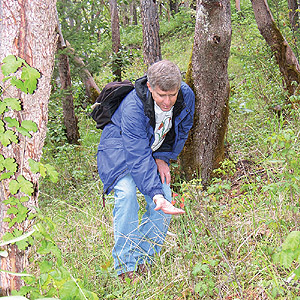 The previous year one of his daughters, Laura, had collected for her garden a plant that she had assumed was the fairly common Fritillaria recurva or red bell. But when her plant flowered it was noticeably different. By this time, however, she had forgotten where she had originally collected it. The family made numerous trips to locate the plant in the wild, but had no luck. The following spring another daughter, Katherine, recognized the rare lily in a flower arrangement in the home of a friend who then led them to the hillside where the plant was growing. In the late 1940s Dr. Helen Gilkey, Oregon State University Botany Department Curator, studied this “new” fritillary and determined that the flower was indeed a distinct species. In 1951 Dr. Gilkey officially described this plant, new to Western science, and named it in honor of the Gentner family who had discovered it. 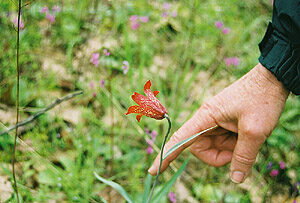 The U.S. Fish and Wildlife Service listed the fritillaria Gentneri on the federal Endangered Species List in December, 1999.