Ex. Dir. Larry Smith presented a slide-show history of the Woodlands Association at the 2018 Hike-A-Thon. To watch it, click on Larry’s History Presentation.

The Jacksonville Woodlands is a true grass-roots organization – started by a group of neighbors and kept going by concerned citizens and Larry Smith’s classes at Jacksonville Elem entary School. Smith never under-estimated the power of a 5th grader – or a group of them – and throughout the formative years the youngsters were key to making the Woodlands possible. These efforts are documented in the articles Smith has archived.

“Carrie Beekman left most of her Jacksonville properties to the University of Oregon to endow a professorship in memory of her father and brother. Her brother, Ben Beekman, taught Latin, Greek, and math at the University for a year, and her father, Cornelius, was a Regent of the University for over 15 years. In the summer of 1989, the University put 21 acres of the Beekman Woods up for sale. It was appraised at $123,000 with 23 building lots. Back in the 70s and 80s the City just took a flat map and without any thought said ‘Oh, 20 acres; you can get 20 lots.’ And that’s the way it was zoned.

“When a ‘for sale’ sign went up on the Beekman Woods, my next door neighbor, Joe Reyman came walking up Laurelwood with this really pained look on his face. He said ‘What are we going to do about it?’ The sign got the neighbors talking. Sale of the property meant major changes for the neighborhood and loss of a neighborhood playground.” 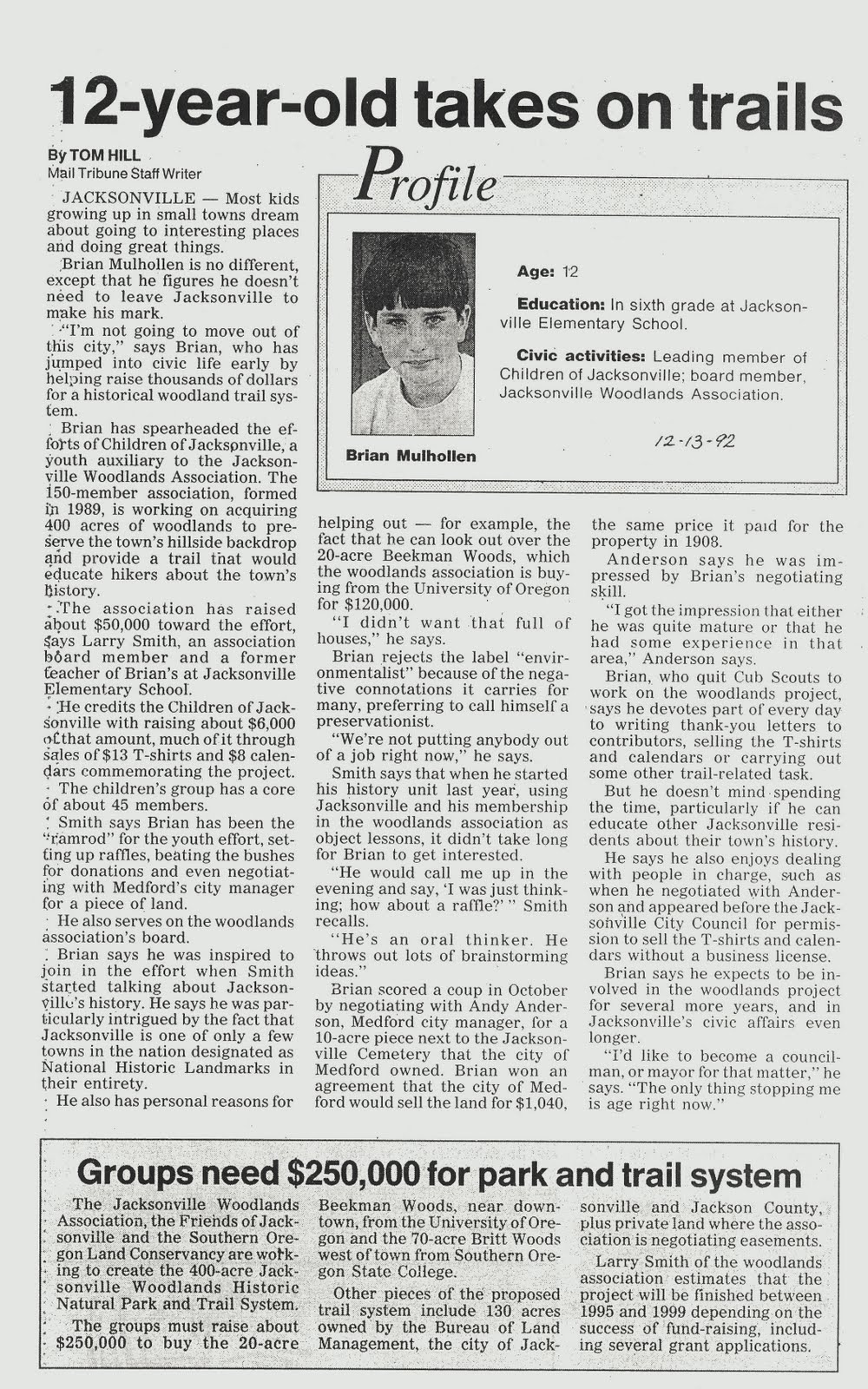 Reyman talked to neighbor Ray Foster, and in November, they held a neighborhood meeting at Foster’s home. “Over 40 people showed up. After trying out several names, we decided on the Jacksonville Woodlands Association. Joe was elected president, Ray vice president, and I was elected to the Board. The goal was to buy the property and go out of business.”

The new organization’s timing could not have been better. The University had decided to sell the property during a Jacksonville building moratorium. It would not be able to obtain full value since no one could build on it. And since the University is a State agency, it had to offer the right of first refusal to another government entity, potentially blocking a private sale.

“Joe convinced the University to take the property off the market until the Woodlands could arrange for a sale. We wanted the City to buy it, but they were concerned it would be a financial drain. So in December we held a community meeting. Joe laid out the map, the process for obtaining the property, and why it would have to go to the city so it wouldn’t be opened up to the highest bidder. He laid it out like an evangelist—‘We need money!’ Before the meeting was over we had almost $30,000 pledged, enough for a down payment. Then Joe and others started writing grants and the City eventually came around.

“We got a lot of press. A reporter from a Central Point newspaper covered our meeting and wrote a major article. A guy from the City of Medford told me to get children’s faces on the front page of the Mail Tribune and money would roll in. I took that to heart. I started getting children’s pictures everywhere as part of my lesson plans—science, nature, history, community service, etc.”

The organization had planned to go out of business after the Beekman property was paid for, and after three years it started losing momentum and focus. Then a welcome alliance with the Friends of Jacksonville brought in three more properties that the Bureau of Land Management had intended to trade to developers. Equally important, it brought in Phil Gahr.

Larry recalls, “If it hadn’t been for Phil, the Woodlands would be history. He reinvigorated it, gave it a bigger picture. Phil became President of the Woodlands, and I became Vice President.”

About that time the City was contacted by Southern Oregon College about the 80 acres of the Britt Estate it still owned. “The property was not in the City’s development plan so only one house could be built on it. That depressed the price, so it was offered to the City for $143,000. We were still paying off the Beekman property, so Phil went after grants, and he got a $60,000 grant from the State for a down payment.

“Then the trees started dying on the Britt property. They had to be cut down because they were a fire hazard. We were allowed to get the profit from cutting the trees, and SOC took another $10,000 off the amount we owed.”

The Woodlands thought the Britt acreage went all the way to Highway 238, but then found it did not include eight acres next to the road. The County told Larry that Sarah Zigler owned the property.

“I went to the Southern Oregon Historical Society and looked her up. She had died in the 1920s.” However, there was a membership application in the Zigler file from a Zelia von Tress who said she was a Zigler descendant. “It had all of her contact information. But she was living in Indiana and she had to be in her 90s if she was still alive. 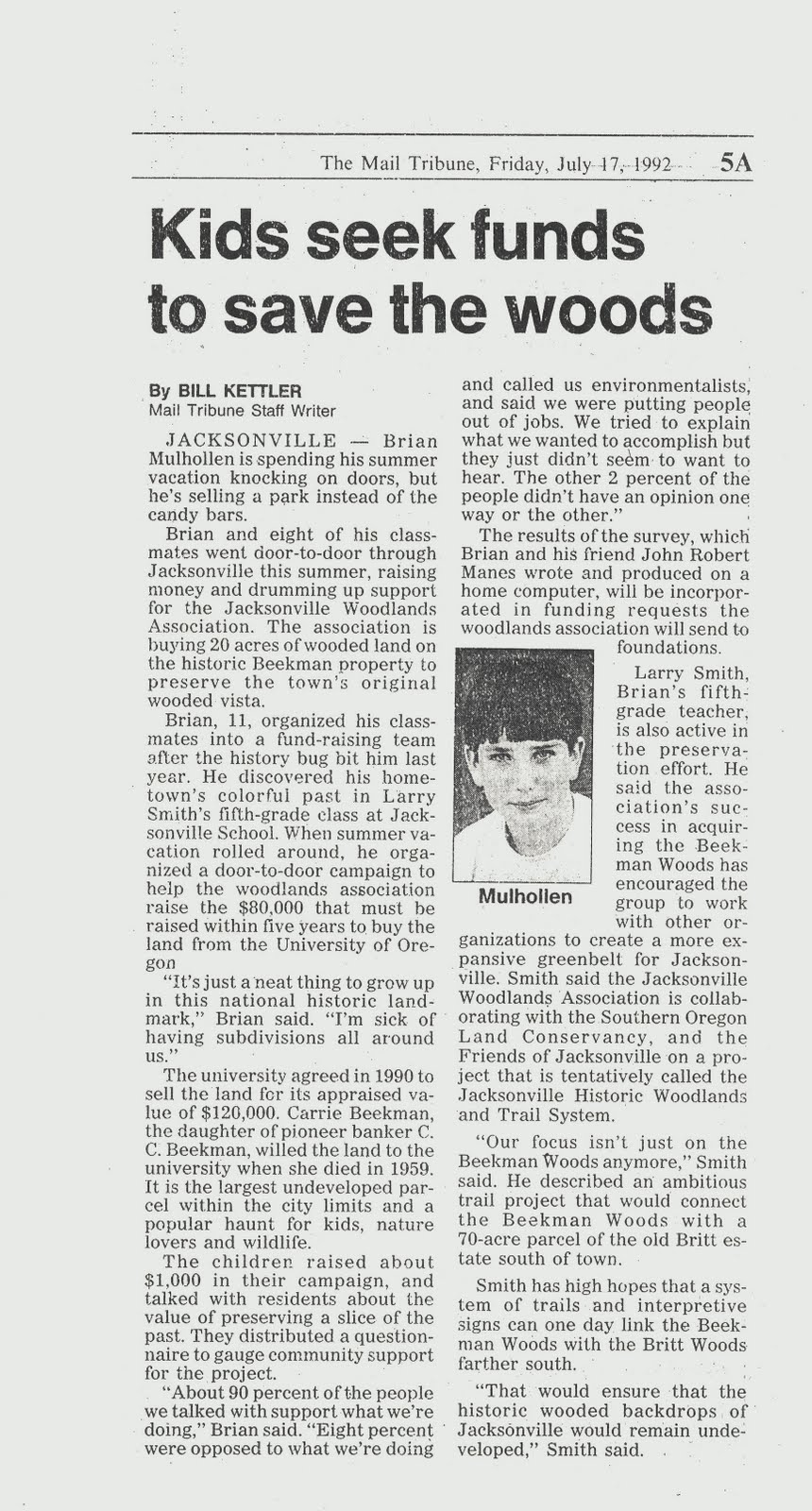 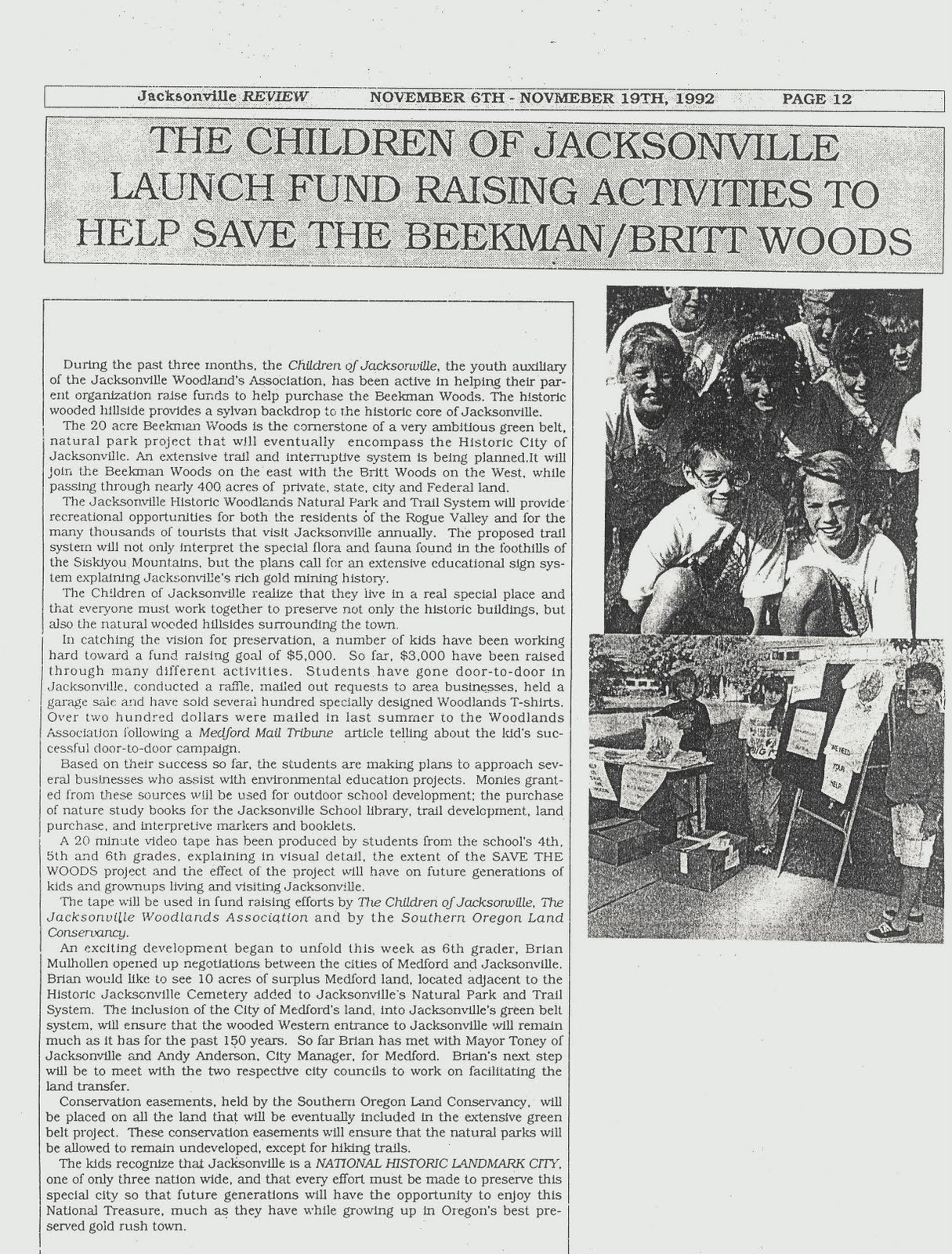 So on Saturday morning I dialed her number with trembling hands, and I heard this faint ‘Hello?’”

Larry talked Von Tress into giving the property to the City, but then a Councilor concerned about the financial impact persuaded the Council to reject the gift. “Von Tress’s nephew owned half the property. He wanted a tax write-off for that year, and it was already the end of December. When I told him the Council had rejected his offer, he said they were getting the property anyway, and the next day he faxed the City a quit claim deed. The City got a $4,000 trails grant, and we built the Zigler Trail.”

About the same time Larry noticed on a map that the City of Medford owned 10 acres across the highway adjoining the cemetery. He took one of his 6th grade students, Brian Mulholland, with him to see it. “I casually mentioned that the property was owned by Medford, and the first words out of Brian’s mouth were ‘How do we get it?’ I said you have to go down to the City and talk to the City Manager.

“The next thing I knew he had made an appointment and his mother had come to take him. I said, ‘Wait a minute—you have to have a plan! First, ask them to give it to us.’ Then I looked in the drawer and saw we had $250 from selling Woodlands T-shirts. So I said ‘If they won’t give it to us, offer them $250.’”

The Medford City Manager actually took it to the City Council. He came back with a proposal that they would sell it to Jacksonville for $1,060—the price they had paid when they originally bought it.

“I told Brian it had to go to our City Council next. I wanted Brian to handle this totally by himself so I did not attend the meeting. He later told me that he made the proposal and said that the City could buy this land for $1,060 and that Mr. Smith had $250 in his desk. One of the councilors said he would throw in $250. The mayor said he could find the balance in the Parks fund. So they raised the money that night.”

The City subsequently did a survey and found that almost an acre of the property was in the cemetery, adjacent to the Jewish section. For years the City had been selling plots on land it did not own.

After about 10 years, Garr resigned as President and the Board put Larry in that position. JWA underwent a complete restructuring process. Larry was not at the meeting where the Board decided to create a non-voting Executive Director position. “It was 2001, and I took it,” he says. Charley Wilson became Board President. 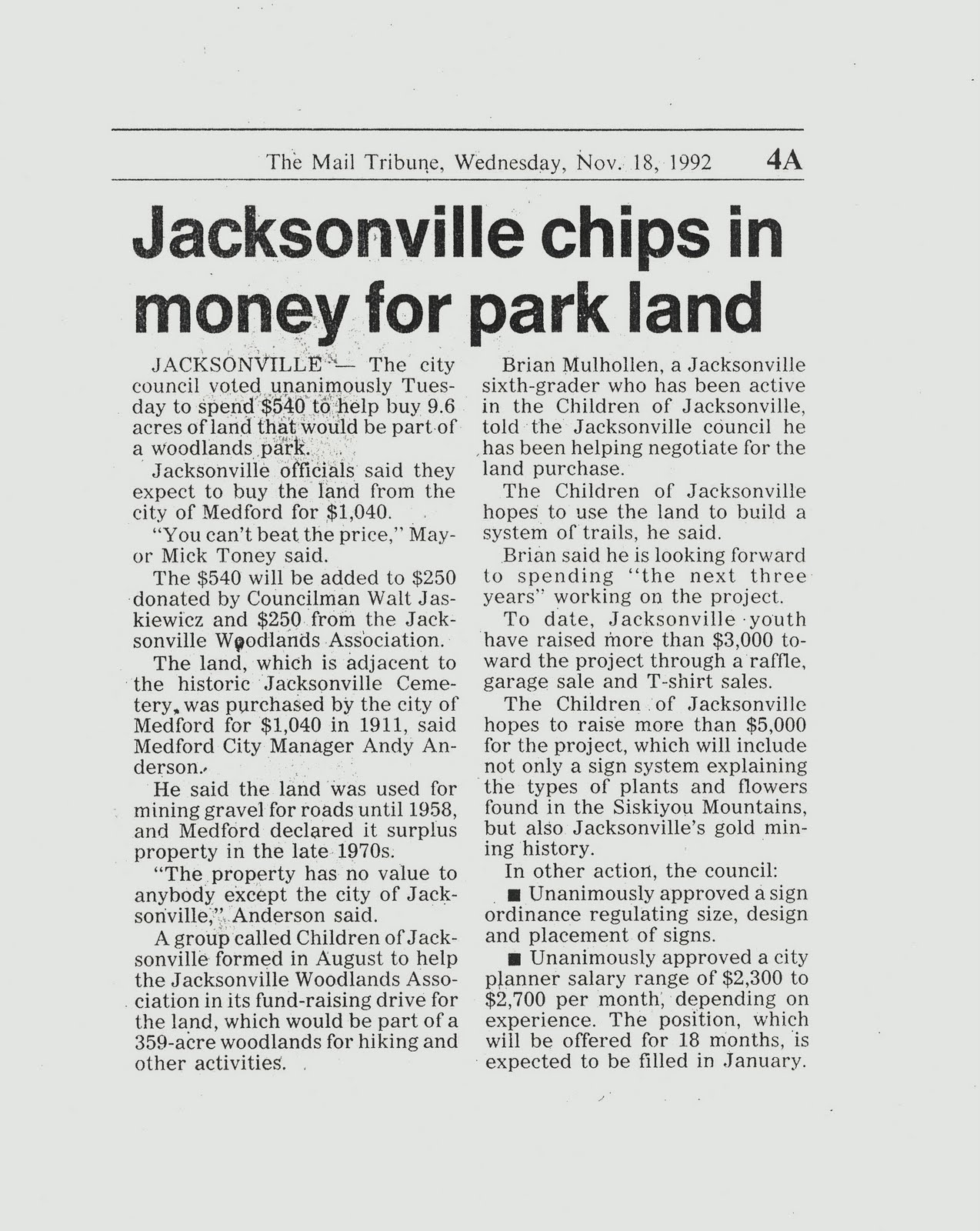 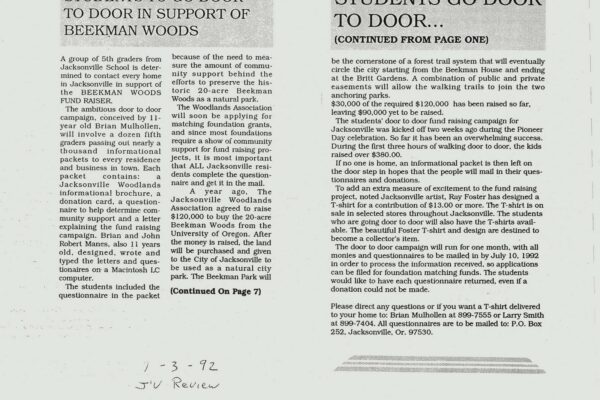 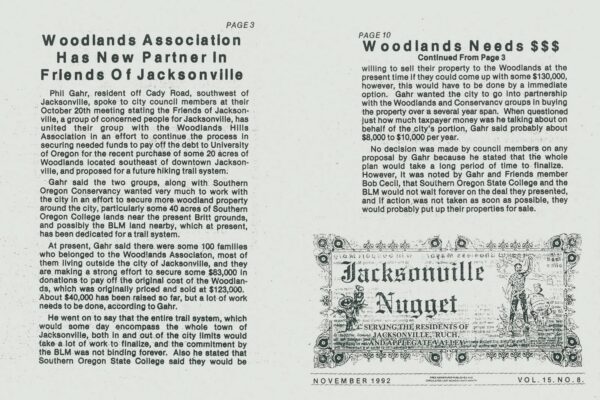 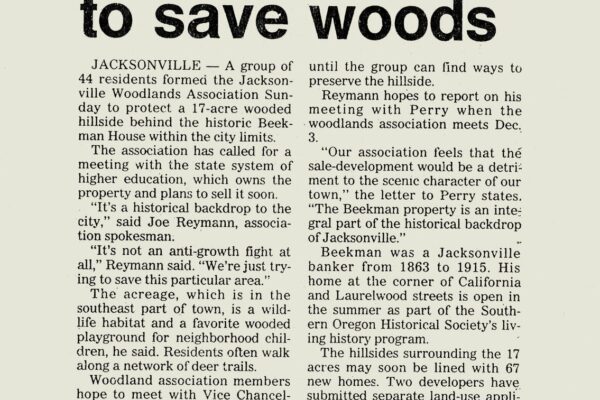