From Goldmines to Woodlands Trails

The Jacksonville Woodlands Association: Protecting the cultural and natural heritage of Historic Jacksonville, Oregon since 1989.

“The Jacksonville Woodlands is the most unique and successful preservation project of its kind in the whole state.”

A group of dedicated volunteers, in a town of only 2,500 residents, have preserved nearly 300 acres of undeveloped native and historic woodlands and created 16 miles of interconnected hiking trials used by thousands of hikers.

Alarmed by the prospect of a 20-acre historic woodlands, located right in the heart of their historic village being lost to development, the citizens of Jacksonville, Oregon rallied to protect their city’s scenic wooded backdrop. Over the ensuing 20 years the Jacksonville Woodlands Association and the citizens of Jacksonville have gathered together an “Emerald Necklace” of 21 properties and a network of hiking trails that encircles 70% of the town’s National Historic Landmark District.

Jacksonville’s Emerald Necklace: from Goldmines to Woodland Trails is the inspiring story of how a group of dedicated citizens and motivated school students were able to pull together the most successful, small-town, all-volunteer, conservation project in the state of Oregon.

By delving into the ownership history of each of the assembled properties, Larry answers the burning question: Why did Jacksonville still have so many acres of undeveloped woodlands spread out around town – 130 years after the town was founded?

Over the course of 36 chapters, Larry traces the ownership history of each “necklace” property from the glory days of the 1850s Gold Rush up to when each property passed into public ownership. Also included in the book are the stories of how Larry’s Jacksonville Elementary School students caught their teacher’s preservation vision and became personally involved in the woodlands project by raising money, selling t-shirts, giving public presentations, building trails, planting trees, and writing letters – lots of letters. And buying land! Yes, Larry’s classes even bought an 1898 goldmine! And eleven-year-old Brian Mulhollen brought a 1910 gravel quarry – now a Woodlands Park.

The success of the Jacksonville Woodlands project proves that no child should be left inside.

The students’ efforts have been recognized nationally by the likes of the Amway Corporation, The Medford School District, Sea World, Weekly Reader, Oregon State Parks, the National Geographic, and Nickelodeon.

Several chapters of the “Emerald” book are devoted to sharing stories of the valiant efforts that were required by a coalition of several dozen private foundations, service clubs, government agencies, (including the Bureau of Land Management, and the National Park Service), Federal and Oregon State legislators, the City of Jacksonville, and our many citizen supporters, to bring this woodlands project to fruition.

Yes, it is quite a story!

Included within the book’s 419 pages are 409 photographs that visually trace Jacksonville’s history from the heady days of the town’s famous gold rush up through the two decades of effort that were required to establish the Jacksonville Woodlands Natural Park and Trail System. The book measures 7.44 x 9.69 inches, is 1.14 inches thick and weighs 2.2 pounds and is printed on 70 lb. acid free paper.

Jacksonville’s Emerald Necklace is available by contacting the Jacksonville Woodlands Association and have it shipped directly to you.

The book is also available for purchase at three locations in downtown Jacksonville: The Happy Alpaca Toys and Supplies, Rebel Heart Books and Art Presence (next to City Hall)

Author Larry Smith is available to community groups to give his illustrated PowerPoint program on the history of the Jacksonville Woodlands: From Gold Mines to Woodlands Trails.
Contact him at: [email protected] or 541-899-7402. 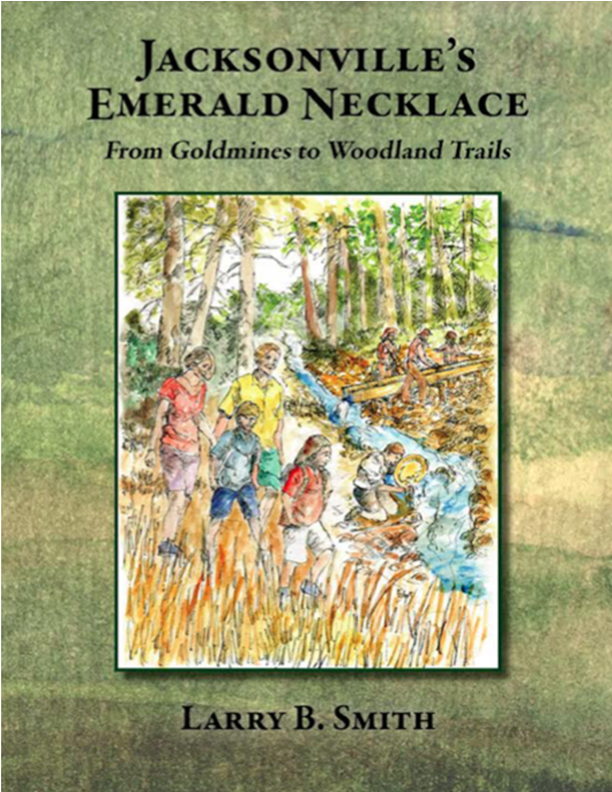 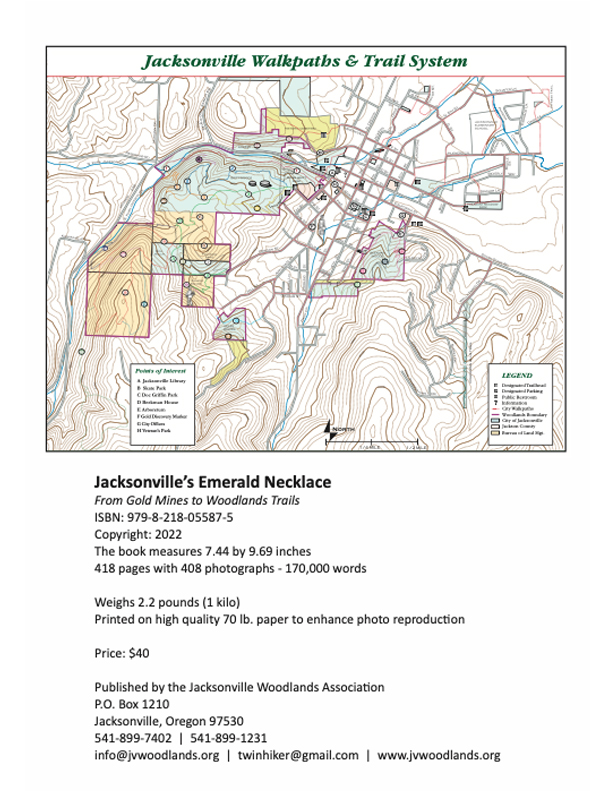